10 Cool Facts You Did Not Know About Beautiful Orlando 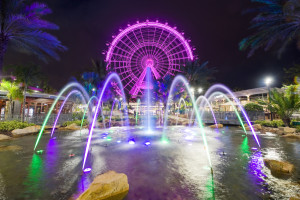 Most people know about Orlando, Florida because it is the home of Disney. Past that, most have no clue about the people, the history or the future of this incredibly cool city. Therefore, the following will shine the light on 10 of the coolest facts that you did not know about beautiful Orlando, Florida.

The town was incorporated on July 31, 1875, and according to folklore and legend, the name has four origin stories.
1.Judge James Speer named the city Orlando after a former employee.

2.Judge Speer garnered the name from “As You Like It” by William Shakespeare.

3.Mr. Orlando was transporting a caravan of oxen to Tampa when he became ill and died. After his burial, people would pass and simply say, “There lies Orlando”; and soon the town became known by the name.

4.During the height of the Seminole Wars, while guarding a military camp, Sentinel Orlando Reeves realized that a floating log was actually an Indian in disguise. Reeves fired a warning shot just before being hit with arrows as Indians ambushed the camp. Troops were able to chase their opponents away, but Reeves would not survive the battle. He was buried on the southern side of Lake Eola.

At the time that the town was incorporated, there were 85 residents. Of the 85 original inhabitants, 22 of them were qualified voters. Additionally, it was Judge James Speer that worked vigorously to ensure that Orlando received a county seat.

In 1965, the iconic Walt Disney announced that Orlando would be the home of Walt Disney World. Upon the opening of the popular theme park, the city was transformed into a viable tourism mecca within the 20th century. With the construction of theme parks with the area, also came the small town within a town, “Celebration”. According to legend, the Disney company wanted to create the ideal American town. Although that was the dream, after construction was completed, the company divested control. To date, the small town has remained true to the original intent of its construct. This causes visitors to feel as if they stepped into Stepford.

This was after the city spent the 19th century as the citrus industry hub for the state of Florida. Once the nation moved into the 21st century, Orlando became a global leader in the innovation economy.

Hopefully, these 10 cool facts gave you a new perspective on the great city of Orlando, Florida. As we have learned above, this is a city that is far more than theme parks and the sun.